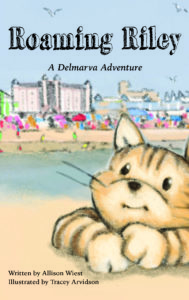 Description of the book:
That’s when I notice Dad’s open suitcase. All of the warm, cozy clothing looks like it is just waiting for me to snuggle up in it...

Meet Riley, an adventurous tabby cat, who loves to chase paper balls and sleep in comfy places. His curiosity takes him on a business trip to Ocean City, Maryland where he instantly meets an animal friend. Through the help of his new tour guide, Riley explores the part of the Eastern Shore more commonly known as Delmarva, from Chincoteague, VA up to Lewes, DE and everywhere in between. Join his adventure as he enjoys some of the area's most exciting attractions, while taking risks and learning about friendship along the way.

About the Author:
Allison Wiest was an elementary school teacher for 12 years but has had a passion for writing since she was young. In 2018, she left her teaching position to finally write the story that had been developing in her head for over five years. Roaming Riley: A Delmarva Adventure is Allison’s first novel in what will be a series of books about Riley’s adventures around the world. As a child, Allison spent one week every summer vacationing in Ocean City, Maryland with her sisters, parents, and grandparents. When she grew older, her family decided to move the vacation to Rehoboth Beach, Delaware. It seemed fitting that Riley’s first adventure would be on the Eastern Shore, at the beach. Allison currently lives only 3 miles away from Ocean City in Selbyville, Delaware with her husband, two daughters, three cats, and a dog.